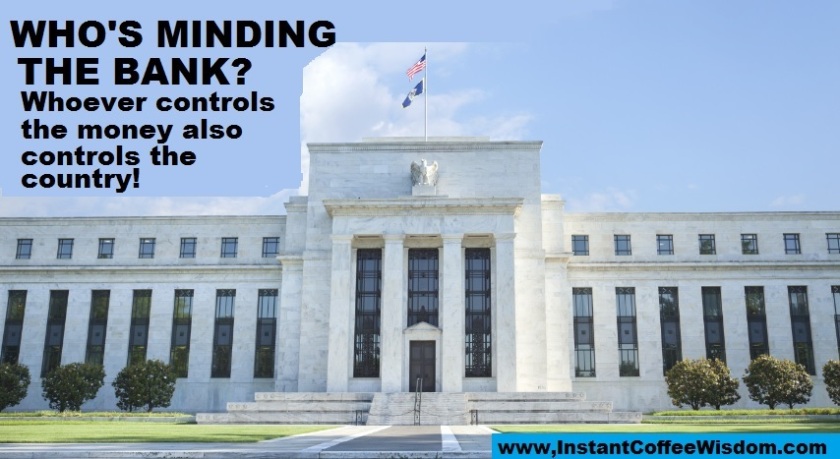 In 1913, president Woodrow Wilson pushed though his Federal Reserve Bank enforcing a central banking system upon the country, supposedly for the good of the country. The Bank that Woody built in turn allowed the USA to begin running up a massive federal debt by borrowing huge sums of money to pay for any shortfalls in the federal budget.  As you may have heard, CASH IS KING because cash on hand provides opportunity to seize the moment and clinch the deal. No one benefits by being a day late and a dollar short.  Borrowing money at interest may at times be necessary, but it is never cost effective over the long term because due to the compounding of interest eventually you end up paying two or three times the original price.  The only difference between personal debt and government debt is the scale, but the result is the same. Whenever the interest rate is increased, the ability to repay the debt is decreased.  Until recently, ultra-low interest rates, set by the Federal Reserve to support the economy, allowed lawmakers to borrow without fretting too much about the cost of that debt. But as the economy has strengthened, the Fed has gradually raised rates.

Each time the Fed raises rates, the stock market also reacts negatively. This is because all banks in the USA are required by law to be members of the Federal Reserve Bank.  These local banks then loan out money to consumers,  which they have in turn borrowed from the Fed. This is known as fractional reserve banking.  If the Fed raises rates, all debtors suffer. Local banks have to raise their rates, to recoup the loss. New loans suddenly become more expensive than old loans, and spending drops. If spending drops, the economy slows, businesses close, jobs  are cut, etc. It’s a cumulative effect. Fractional reserve banking is a sort of ponzi scheme in that as a result, approximately 90% of the ‘money’ in the world really doesn’t exist. It’s just debt on paper, an I.O.U.  The only ones growing rich are the owners of the banks.

How do you make money on ZERO?

Forget government spending for a second, and let’s go back to basics. (Remember the only real  difference between macro and micro economics is the scale.)

You receive a credit card offer in the mail offering 0% interest on new purchases and balance transfers for a year, or longer.  For the sake of this hypothetical example, we’ll set the term at two years, no interest, and a credit limit of $20,000. You now have a revolving credit line, and the bank is secretly hoping that habitual use of this line of credit will result in a maxed out card. Let’s assume that on day one, you make a $20,000 purchase on some extravagant item that you can’t afford, but have always wanted.  Now assume that the minimum monthly payment is just 1% of the total balance.  The 1st month you pay $200, the 2nd $198, the 3rd $196 etc. At the end of one year, you still have a balance over $17,729. And you only have 12 more months to pay this off before your 0% offer ends, and the bank starts charging you its normal 22.9% rate on your outstanding balance.  If you could only afford the minimum balance with your current income, you will never be able to pay off this debt in time, and even worse you’ll be getting charged more in interest than you are paying in, so you’ll be enslaved by debt for the rest of your life. The only way to pay off this initial debt in a 24 month period is to make 24 equal monthly payments of $834 and make no new charges. Under that repayment plan, you have a true zero fee loan that the bank makes no money on, and you beat the trap that most people fall prey to.

So how do we pay off the federal debt?

In a nutshell, the same way. We need the Fed to reinstate the zero percent interest rate, and keep it there while we trim all the fat from the federal budget  eliminating any and all unnecessary spending.

Unfortunately, the Federal Reserve is a private bank, not owned by the government. It is unique in that it is both public and private, and is independent within the government. As such, it can control our economy for better or worse. Just as nominees appointed by the president to the Supreme Court of the United States can impact our country for decades, so can nominees to the Fed. President Donald Trump may have a golden opportunity to reshape the orientation of the Federal Reserve as several of its board members will be retiring in the near future.  Currently, Trump’s two recent nominees to the central bank, Herman Cain and Stephen Moore, are imperiled by growing resistance from within the president’s own party.   The RINO Republicans are jeopardizing the president’s promise to strengthen our economy, eliminate our national debt, and Make America Great Again by opposing his nominees.  Cain was a former presidential candidate famous for his 9-9-9 tax reform plan and is a big supporter of Trump, as well as a long-time friend.  Herman Cain’s nomination is effectively dead, but that may have been a ploy to get Stephen Moore confirmed instead. Moore is a strong supporter of capitalism, and has stated that the 16th Amendment which created the national income tax was the most evil law passed in the 20th century.   All of this is a moot point is the Democrats should somehow steal the 2020 election, so it is of the utmost importance to stand behind President Trump, now more than ever. As always, I wish you success and happiness!