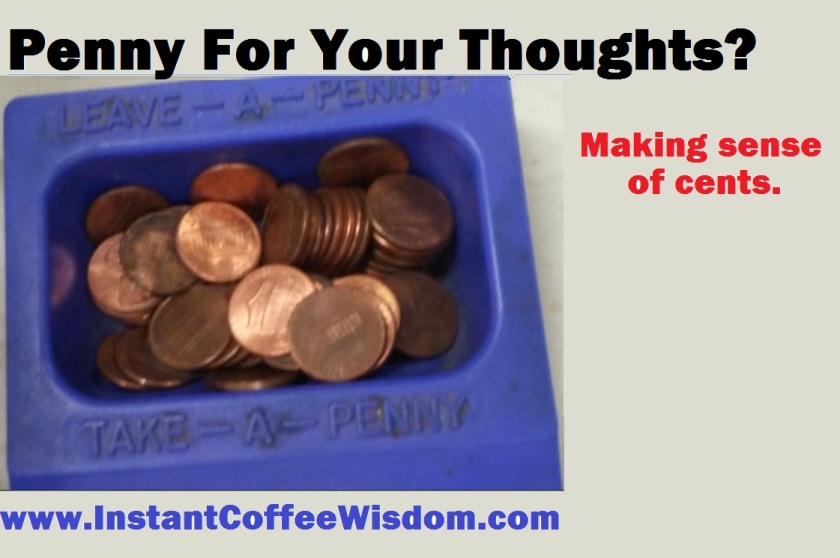 If you’ve ever heard the saying “Penny for your thoughts”, and thought a penny was such a paltry sum, consider that when the saying was first coined in the 1500’s, a penny was a pretty fair amount.

I do a lot of walking during my day job. About five to seven miles. Not a day goes by that I don’t find at least one penny discarded in the street. Although there are some who superstitiously believe that a penny face down is  bad luck, I disagree. A penny found is a penny earned and the only luck a person has is the luck they make for themselves. I also use these found pennies as a reminder to say a quick prayer thanking God for all I have.

Way back in the 1970’s when I was a young boy, there was still a few years when you could go to the corner Spanish Grocery store and buy penny candies. I remember one of the last times I lived in that neighborhood when I walked into store with a dollar and asked for one hundred Big Bols, which Patricia dutifully counted out of the candy jar, and then handed over in a paper bag. I felt like I was the richest boy in Queens NY.  Big Bol was a cheap wrapped penny candy that was sort of a gum drop with a hard candy shell. Honestly I can’t even remember what they tasted like it was so long ago, but if pressed I’d say guava. Sadly, those days are long gone. 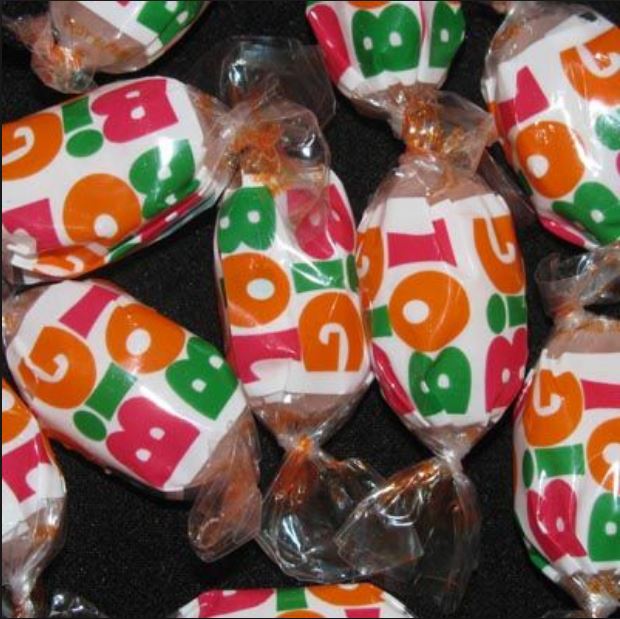 A penny doesn’t buy much these days.  You can still stumble upon an online deal for a one cent item with free shipping, but most places simply dispense with the penny all together, or change shipping. Last week, I found a website that offered TOTALLY FREE (including shipping) 300 printed business cards. The back of the card advertises the company and reads FREE by 4OVER4.COM This is a loss leader and an advertisement at the same time, because they can write off the promotional item as a business expense and get free advertising, all while creating good customer relations with potential new clients . Quite ingenious.

Despite the fact that pennies don’t go as far as they used to and are often discarded, Americans still love our pennies and resist efforts to eliminate the coin. Our neighbors to the North abolished their penny in 2012. The Canadian penny coin was produced from 1858 until May 2012. Distribution by the Royal Canadian Mint ceased as of February 4th 2013. From 1982 until 1996, the shape of the penny was 12-sided rather than round. In 1997, the penny’s composition changed to 98.4 per cent zinc, with the rest copper plating. Since 2000, its composition has been 94 per cent steel.  Whenever I stumble upon a Canadian penny, it gets saved now in my ‘Canadian Penny Jar’.  I also save US Wheat cents and earlier, and I do have a few British large cents.

Production of the US penny coin has been continuous since 1793. Prior to 1856 pennies were produced in the large cent coin. There are not many of these in existence today because  many of these early coins were melted down as the copper was more valuable than the coin.  The US penny was made of mostly copper prior to 1982 when the mint switched production to the cheaper 97.5% zinc plated with copper coins still in use today. The US penny has been the same size since 1856 as it is today, but there have been some ‘cosmetic’ changes.

The two precursors of the modern Lincoln penny were the Flying Eagle (1856-1858) and the Indian Head (1859-1909) I once found an Indian Head Penny discarded in the ‘Need a Penny?’ tray at a Rutter’s convenience store in York PA when I stopped for gas. I couldn’t believe my good fortune at discovering the more-than-a-hundred-year-old coin sitting in the dish right on top, unnoticed by everyone except me! 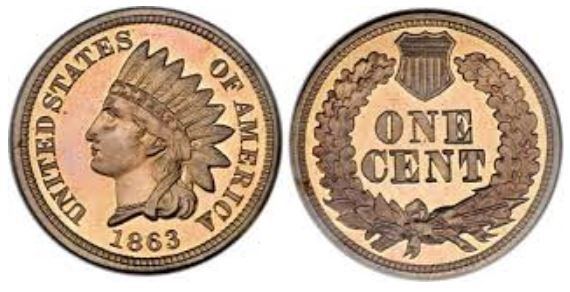 Abraham Lincoln (February 12, 1809 – April 15, 1865) was the 16th President of the United States. Considered the Last Casualty of the American Civil War, Lincoln was the first Republican president. He commanded the Union Army in its victory over the South in the bloodiest war the US ever fought in. The victory ended slavery in the USA, preserved the Union, and Lincoln is recognized as the greatest president of the nineteenth century.

In 1909 to commemorate the centennial of Abraham Lincoln’s birth, the US Mint replaced the  five decade old Indian Head cent with the Lincoln Wheat penny designed by Victor D. Brenner. A few early coins were produced with the designer’s initials VDB on the face of the coin. The front of the coin has the current profile of Lincoln, the obverse had two stalks of wheat, and read ONE CENT.   During WWII when copper was needed for the war effort, the 1943 steel cent was produced. Likewise I once found one of these wartime Steel cents discarded in the  ‘Need a Penny?’ Dish at a 7-11 convenience store in Reading PA.  The clueless clerk was rambling on about a person being dishonest and painting a penny silver in order to ‘pass it off as a dime’.  I nodded sympathetically while replaced the offending penny with a modern one, then left the shop with a huge smile on my face.

In 1959, on the sesquicentennial of Lincoln’s birth, the Wheat on the obverse was replaced with the Lincoln Memorial for the next fifty years. 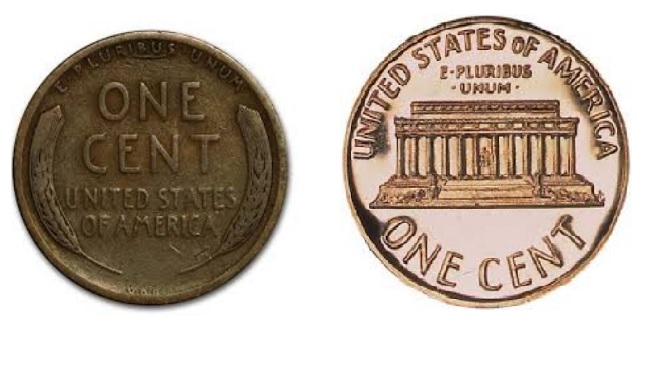 To commemorate the bicentennial of Lincoln’s birth in 2009, the mint issued pennies with four different designs on the obverse depicting scenes from the life of  Abraham Lincoln. 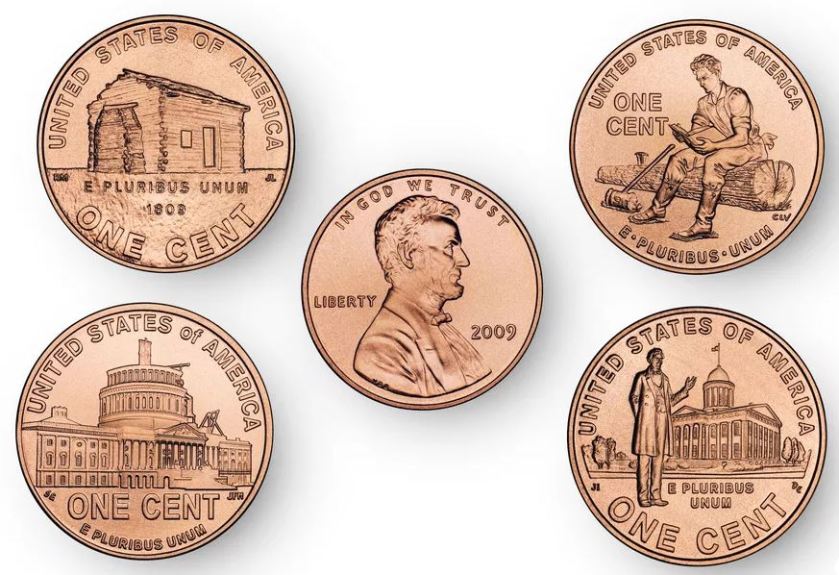 Since 2010, the reverse side of the penny has sported the Union Shield. 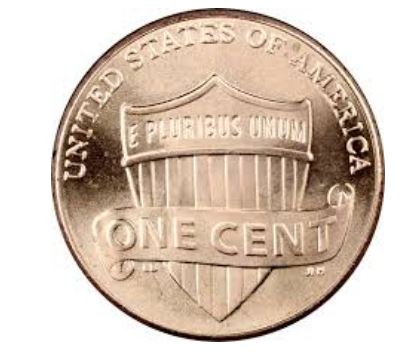 Yes, the US penny is a very common coin, but Abraham Lincoln was a very uncommon man. It’s quite fitting that even the poorest person in our great country can easily posses a coin bearing the likeness of this great man. As always, I wish you success and happiness!