Is the sky really falling? 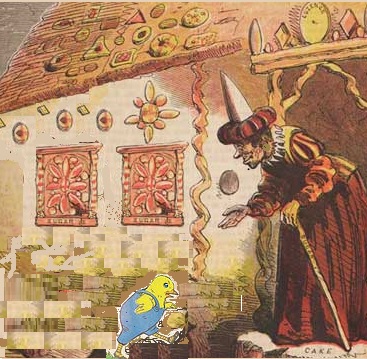 Chicken Little lived in Storybook Land. He had a nice government job working for the King, Mr. T. Chicken Little wasn’t born rich, but he was smart and read a lot. He wanted to be rich someday like his cousin Goose Golden-Eggs. Money just seemed to drop out of Goose. She left a pile of wealth everywhere she sat. It didn’t seem fair that some people were  born rich and had more money than brains, but no one ever said life was fair. Chicken had feathered his nest with Index Funds from the Stock Market. He hoped to have a very nice nest egg when he retired. He always paid attention to what was happening with The Stock Market.

The Stock Market was co-owned  by Mr. Bull and Mr. Bear. No one had seen Mr. Bear in years, not since 2009. No one liked it when Mr. Bear ran the market, but thankfully he only did so about once every seven years, and he never ran it for very long. Mr. Bull did a much better job running the Stock Market and always managed to clean up the mess left by Mr. Bear. He even had a new friend keeping him company on Wall Street,  Fearless Girl who just showed up one day and has hung around with Mr. Bull ever since.

Now Chicken Little was always running home from work each day, because he always wanted to see what the Talking Heads on TV had to say. Everyone in Storybook land watched different Talking Heads. There were many of them and you could always find one you liked. The problem was that they all said something different, so you had to be really careful which ones you listened to. Some of them said some very bad and dumb things, and if you listened to them too much, you grew very sad and jaded, like The Old Witch.

The Old Witch liked to tell everyone how  smart she was because she was very old, and she watched the Talking Heads all day long, so she knew everything. As Chicken Little was passing her home, she waved him over.

“Hi Chicken, did  you hear what my favorite Talking Heads said today?”

“No Witch, I was busy working all day so I could have more money to feather my nest.”

“They said Mr. T the King is an idiot, his son is retarded, and he’s going to destroy the world.”

Chicken Little was aghast! He couldn’t believe anyone would say such terrible things, much less listen to them, so he decided to quickly change the subject.

“Say Witch, you’re old and know everything. What’s the best thing to do with your money? I leave ten percent of  my money in  The Stock Market with Mr. Bull and he takes great care of it.”

Chicken Little didn’t own a house, he rented a nice apartment with a great view. He eyed her home skeptically. “Isn’t candy bad for you? I heard it makes you fat and gives you diabetes.”

The Old Witch scowled and gave him an angry look.

“What do you know? You’re not as old as I am, and you’re not as smart. I watch the Talking Heads all day. Chocolate comes from cocoa, which is a bean.  Candy is made with sugar which come from sugarcane. So both come from plants and therefore they are both vegetables and vegetables are good for you. Now scat! I’m busy, my favorite TV show is about to start.”

Chicken Little walked away shaking his head. Next he came to the house of the Pigs.

Practical Pig owned a house made of Gold Bricks. He and his brother Fifer were in the yard gardening as Chicken walked past. He called to them.

“Hey Pigs! I was talking with the Old Witch about money, what do you do with yours?”

“All my money is invested in real estate and precious metals.” replied Practical Pig pointing at his house made of gold bricks. Fifer said nothing, he just smiled.

Practical was older and smarter than his brother Fifer. Fifer lived with his brother and slept on his couch. Fifer  used to own a house made of sticks. It was built on a foundation of sand, and financed with a ‘Ninja’ loan. It was a variable rate mortgage which inflated quickly. Fifer eventually lost his house of sticks when the housing bubble bust, so now he had to live with his brother.

“It can be, but everyone has to live somewhere, and gold had never been worthless so both are great investments.”  Practical replied.

“Say Practical, do you ever hear from your other brother Fiddler?”

“Oh yeah. I spoke to him on the phone this morning. He just moved into a huge expensive mansion financed by BitCoin and Ethereum. It’s totally built out of Ones and Zeros. I worry about him, some day he’ll be sleeping on my couch too.”

Chicken waved goodbye at the brothers and hurried home to his maintenance-free apartment.

The first thing he did when he got home was to turn on the News to listen to what the Talking Heads were saying about the day’s business news. They were all screaming that the sky was falling because the market plunged nearly 666 points and that it was probably the end of the world.

Chicken Little was so shocked by the news that he passed out!

After he recovered from the shock, he reviewed the various news clips to see why the market fell.

Some of the Talking Heads blamed Mr. T the King  for constantly letting his pet blue birds The Tweets fly free,  and said that he didn’t play well with others. Some of the Talking Heads said the Market Fell because The Wicked Witch of the West was the rightful ruler of Storybook Land and the throne had been stolen from her. A few others blamed it on The Man in the Moon and yelled at the sky. A few blamed the Russians. A few said they had ‘no idea why, it was a mystery.’ A few said it fell because the market fluctuates and it’ll bounce back. Uncle Warren the Wise Wizard of Wall Street said he was going to buy lots of cheap stocks first thing in the morning.  Little Jack Horner  sat in the corner eating his pie. The Cheshire Cat smiled until he faded away,  leaving only his grin. Everyone seemed to react to the news differently.

In the end, Chicken Little checked that his nest was still intact, saw that his index stocks were still up for the year, and discovered that despite what some of the Talking Heads claimed, everything was going to be just fine. He decided to listen to Uncle Warren and pick up a few bargains at the Stock Market, and knew that one day, he too would grow up to be a Wizard of Wall Street.

Fairy Tales were a traditional way to entertain young impressionable minds while at the same time conveying a moral lesson. Even Jesus Christ occasionally turned to parables when trying to covey complex ideas to the crowd. There are lots of individuals who have difficulty understanding  how the economy, the stock market, and even personal finances work.  Throw in politics and religion and people get real confused quite fast.

February 2nd, 2018 marked one of the largest drops of the Dow Jones Industrial Average  since 2009. The thousand point plunge from the prior week’s high probably scared the novice investor to death. It’s not as bad as some of the ‘experts’ are claiming. Investing in stocks still results in far greater returns on investment than real estate, precious metals, or even the dangerous new gimmick, crypto-currencies like BitCoin. I’d stay far away from that last one, when that bubble pops, it’s going to burst loud and hard!

The bottom line is that there are many factors which impact our day to day lives, and just as many pundits, cynics, and fools with opinions. Everyone has an opinion.  It can become quite the task to filter out the many voices and distill all the information to refine a pure source.  What do singers , athletes, and movie stars really know when they speak on a topic? For every one celebrity with an actual college degree, there are at least a hundred who barely even graduated  high school.  Check your sources, check your information, and review your facts before making a decision which could potentially ruin your future happiness. Just because everyone around you is telling you what you want to hear doesn’t mean it’s the truth. You just might be in an echo chamber surrounded by sycophants.   Tread carefully.  As always, I wish you happiness and success!