Making the case for giftcards. 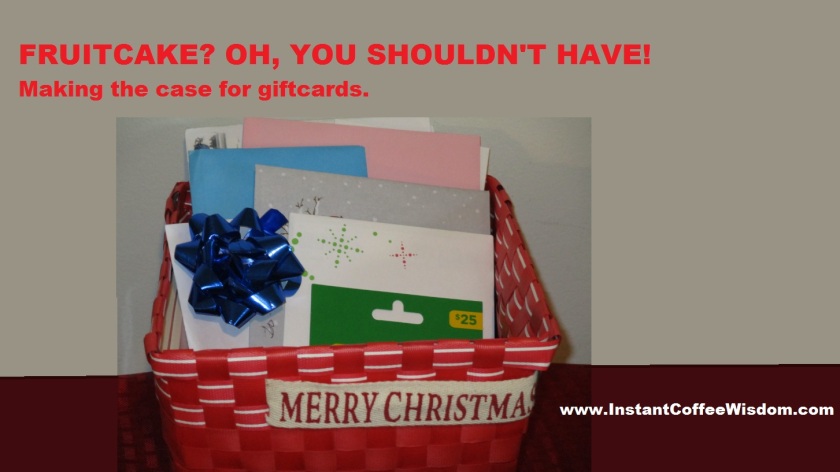 Christmas is the most wonderful time of the year according to numerous cards, songs, and movies. For some people the holidays are filled with stress as they obsess over various topics some of which are related to the practice of gift giving. ‘Tis the season to go broke for many people who go way over-budget on holiday spending. Unfortunately, many times we  end up giving some people on our lists ‘the perfect gift’ which ends up being something they wouldn’t have purchased for themselves ever, even if it was on sale 95% off, and they had just received a huge Christmas bonus in their paycheck.  Everyone has different tastes, and some people are just impossible to buy presents for.

To top it all off, It’s probably also impossible to get gifts for our entire family, as well as every friend you know.  So we agonize over who gets a gift and who doesn’t.

In the 1983 film ‘A Christmas Story’, a young boy named Ralphie obsesses over the only gift he wants for Christmas, a Red Rider BB gun. Everyone he tells this to, including the mall Santa, admonishes him that he’ll shoot his eye out.  It’s a silly movie, and a little fun. I’ve watched it and at least one cable channel TNT shows the movie on a continuous loop each Christmas, but it’s no ‘It’s A Wonderful Life’. Now life seen through the eyes of a child are very different from the view of an adult. When we were kids, our parents were probably the only ones who knew what we wanted for Christmas, and as children our lives were over if ‘Santa’ failed to deliverer the coveted item. I’ll be the first to admit that I was a spoiled brat as a child and cried when I got sensible presents like socks and a warm coat. Now as a grown up, I want what ‘I want’, and sometimes I get an undesirable gift. It’s disappointing, but it’s not the end of the world.

The gift that keeps getting given.

One ‘option’ that we as adults have adopted to deal with the unwelcome gift is the practice of ‘re-gifting’. Re-gifting in and of itself is not a  bad thing, but it can backfire. Whenever you re-gift, make sure it’s not in the same circle of friends, and NEVER EVER EVER re-gift  within your family. You don’t want to give the fruitcake ‘Aunt Francis’ gave you, to ‘Uncle Billy’.  Also make absolutely certain that there is no tag or personal note anywhere in the gift that identifies it as a ‘re-gift’. Think of these ‘twice-given’ gifts as recycling, and as a way of being thrifty. Just because you don’t want it doesn’t mean someone else wouldn’t appreciate it.  If it’s something that you absolutely ‘hate’ keep in mind that re-gifting a despised item may elicit the same reaction in the receiver as it did you. If they in turn re-gift the gift, it might end up coming back to haunt you, like the Ghost of Christmas Past, or that infamous  fruitcake that seems to be the same fruitcake that has been around, and around, and around.

Cash is king, but some people still think of cash as an impersonal gift. Sticking bills in a envelope is probably the easiest gift you can wrap. The other option is the gift card. Like cash, a gift card enables you to give a gift that the recipient ACTUALLY wants, as opposed to what you think would be perfect for them. Gift cards have come a long way from the days of the paper gift certificate.  Some of today’s gift cards (BUT NOT ALL) can even be purchased by credit card. Some gift cards are VISA/Mastercard ‘money cards’ and are good at any merchant. Store cards are good only at that store. You can’t use a Burger King gift card at McDonald’s.  As a result gift cards are now the most popular Christmas gifts among adults, and are also the most easily ‘re-giftable’ gift, second only to cash.

Children don’t understand the economics of Christmas. For them, it’s all about the toys. For adults, it not about what’s under the tree, it’s who is around it that really matters. Money is a renewable resource, but people are  finite and when we’re gone, we are gone.   So as we head into the final days of the Christmas season, keep it simple and remember that it’s the thought that counts. As always, I wish you success and happiness!