What are we waiting for??? 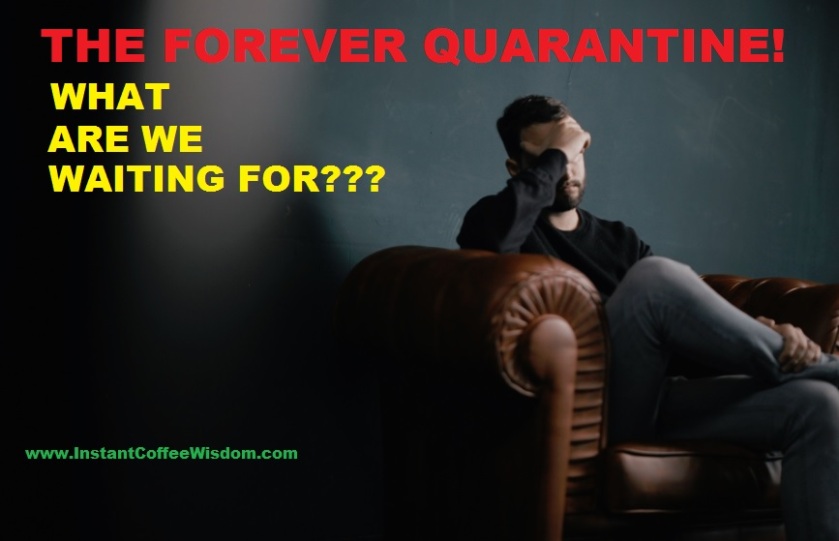 The  Antiseptic Baby and the Prophylactic Pup
Were playing in the garden when the Bunny gamboled up;
They looked upon the Creature with a loathing undisguised;—
It wasn’t Disinfected and it wasn’t Sterilized.

They said it was a Microbe and a Hotbed of Disease;
They steamed it in a vapor of a thousand-odd degrees;
They froze it in a freezer that was cold as Banished Hope
And washed it in permanganate with carbolated soap.

In sulphurated hydrogen they steeped its wiggly ears;
They trimmed its frisky whiskers with a pair of hard-boiled shears;
They donned their rubber mittens and they took it by the hand
And elected it a member of the Fumigated Band.

There’s not a Micrococcus in the garden where they play;
They bathe in pure iodoform a dozen times a day;
And each imbibes his rations from a Hygienic Cup—
The Bunny and the Baby and the Prophylactic Pup.

—poem Strictly Germ-proof by Arthur Guiterman  (His poem was published in the Woman’s Home Companion in 1906 and poked fun at the growing obsession that Americans seemed to have with trying to keep things clean.)

I cannot speak for other countries, but I am seeing a growing frustration with this seemingly endless shutdown. COVID-19, the virus that shut down the world is by and large the top health topic of 2020. Everyone, everywhere is affect by this stupid virus in one way or another. It is impacting health, finances, and religious activity. I like a large group of American citizens feel that the timing of this shutdown and its impact on the nation during an election year is highly suspect.

It seems that there are two camps right now, each firmly entrenched in their own beliefs. Disagreeing with a member of the ‘other camp’ will not change their mind, it will only bring down a storm of wrath and hatred upon you.

The two camps are:

The country needs to go back to normal TODAY! You quarantine sick, elderly, or infirm people to protect THEM. Forcing healthy people to stay locked-up takes away their freedom and their rights.  This is tyranny, and people need to rise up.

If you are an ‘essential worker’ or have a monthly income, sitting at home is a minor inconvenience. Small business owners stand to potentially lose their life’s work and savings. Furloughed employees in many cases have NO income and cannot feed their families. They MUST get back to work FAST or their children will starve. When this lock-down fist occurred, it was supposed to be temporary. A couple of weeks. Two weeks in March stretched to first ALL of April, then ALL of May, and now PART of June, but maybe longer, and watch out, there might be a ‘second wave’ in the Fall. This madness must end. Just this past Friday there were protests at the State Capital calling for the impeachment and or resignation of Gov. Wolf because of his handling of this crisis.

“We have a saying in the movement that you can’t trust anybody over 30.” Jack Weinberg activist, in an article printed on November 15, 1964

It’s funny how the hippies back in the 1960’s used to say don’t trust anyone over 30. Once they themselves finally ‘grew up’, their tune changed to ‘don’t trust anyone under 30’. It’s ironic how things come full circle. I believe the most dangerous part of this society today is how these young people, the so-called ‘millennials’,  are so quick to get information and affirmation from peers or viral internet memes, rather than seeking timeless wisdom or expert opinion. It’s as if any bit of information that didn’t occur within their lifetimes does not exist. It’s hard to blame them in some cases because the signal to noise ratio is so vast. When I was a very young boy, the internet didn’t exist, we had seven TV channels and there was no such thing as DVD’s or streaming content. If you missed it, you didn’t see it unless there as a re-run.

Today, with the full sum of human knowledge in the palm of their hand, people choose what facts the want to believe,  and ignore anything that doesn’t fit their narrative. Again, who can blame them? There is so much content being generated each day that it would take a lifetime just to read, watch, and listen to everything created that day.  Now you miss it because it becomes buried in the miasma emanating from the internet.

I AM THE BUNNY OF DOOM! FEAR ME!

Lately I have been focusing on the past.

The poem Strictly Germ-proof has been running through my head for the better part of the week.  Especially the last two lines of the first stanza. When people see me walking around refusing to wear a mask or gloves, I see their loathing. I am ‘the bunny’, but I refuse to let THEM freeze me in a freezer cold as banished hope!  This bunny has teeth and will lash out in self-defense if you attempt it. I have had co-worker who practically accused me of attempting to murder their entire family because I refuse to comply with these CDC recommendations. If you think a mask and gloves will save your life, YOU wear them! If you feel I am some asymptomatic ‘Typhoid Mary’ stay as far away from me as you feel safe. Go take a long walk on a short pier, it might do me some good. And as you sit in self isolation,  maybe you should watch the 1931 film Laughing Gravy, it’s one of my favorite Laurel and Hardy films and should be available to watch online somewhere.  As always I wish you success and happiness!