The importance of training!

According to legend, Pheidippides was a Greek messenger who ran 25 miles from Marathon to Athens to deliver news of the victory in the battle against Persia in 490 B.C. He said to the king of Athens, “Joy to you, we’ve won” and then he immediately died on the spot. This is depicted in the famous painting Pheidippides by Luc-Olivier Merson, 1869. 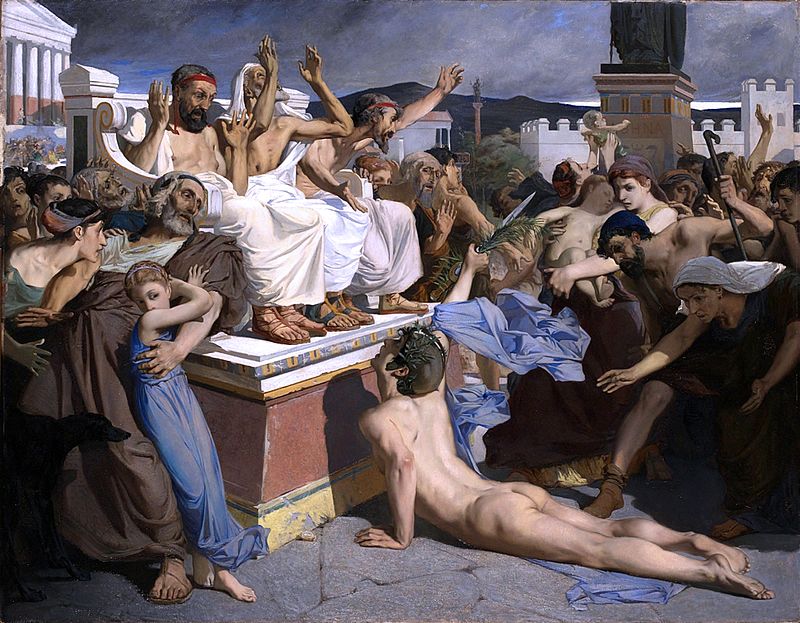 Twenty weeks from today, on November 22, 2020 I will be running my first marathon.  The modern marathon was named after the famous run by Pheidippides, but it is by no means a death-sentence.  According to a medical review conducted in 2016 the risk of death during or shortly after running a marathon is between  .6 and  1.9 deaths per  100,000 participants.  According to cardiologist Dr Lim Bee Chian  marathon runners often collapse near the finishing line because the build-up of lactic acid in the blood during the run triggers abnormal heart rhythms. In addition, they also suffer from exhaustion, emotional stress, dehydration and heat stroke.

On average, approximately 40% of participants in a marathon are first timers like myself. In many cases the marathon is their first official road race, which is a terrible idea. There is a very old saying that goes ‘You need to learn to walk before you try to run’. On New Year’s Eve 2018, after being inspired by long distance runner Nathan Maxwell, I began training to become a runner. I was not training to run a marathon first, I was training to run a 5K race that was months away. On Sunday April 28th, 2019 I ran my first ever 5K. A few months later I ran my first ever 15K, and a few months after that on September 7th 2019 I ran my first half-marathon. The following month I did it again and ran my second half-marathon.  The important takeaway point I am trying to make is that the training was essential. It was consistent and methodical.  In 2019 I ran a total of 11 officially timed races, this year I had planned to run double that number.

Long races which are officially timed have support stations along the race course for runners to grab water, Gatorade, or little packets of glucose gel to enable you to keep going. Shorter races such as 5Ks often provide water and snacks at the end. The average time for a 5K race is 30-40 minutes.  10K runs average 50-70 minutes. Good times for half-marathons and marathons are 2hrs and 4hrs respectively, and involve maintaining a 9min per mile pace. I cannot run that fast yet, but I am getting better. Longer faces have cutoff times. Typically 4 hours for a half-marathon and 7 hours for a full marathon. So basically if you can run at a consistent pace of 15min per mile, you can still finish the race before the cutoff time, but you have very little wiggle-room.  I average about a 13min mile, and I am still considered a new runner. I only ran my first official race 14 months ago, so I am just two months into my second year of running, but I am definitely faster than I was a year ago.

Then mid March, the coronavirus shut down all the gyms and cancelled almost every race I had lined up for this year as part of my training regiment.  This in and of itself could have thrown off my entire marathon training plan. Fortunately  Gina,  a member  of a run-club I belong to shared a virtual run series that spanned 12 weeks. Last  Sunday was the final race. During the series I ran 37 races, all timed with my professional runner’s watch, a Garmin Forerunner 945. If you add the 4 races I got in before the virus that shut down the world struck,  I have run 41 races so far this year and am at nearly 4 times as many races as I ran in 2019, so I know what I am doing. A runner runs, and I am a trained professional now. I created an info-graphic depicting the 37 races I ran for The Un-Cancelled Project over the 12 week series.

If there is one thing I have learned in my 14 months as a runner, it’s not the distance that kills you, it’s both the pace, and dehydration.  Since most races currently are virtual, there are no water stations so I need to self-support. As a Clydesdale (a heavy-weight runner) I require more water than the average racer, especially during these hot summer months. Dehydration is a killer. (So is carrying all those sport bottles of frozen endurance fuel!)  As I start gradually increasing my distances according to my running plan,  the water needed may become a problem.  So far I have run 4 virtual half-marathons in the past two months alone.  I underestimated my water needs for the 1st one May 2nd. So I ran out after 11 miles with 2.1 miles remaining and the hot sun beating down on me.   Fortunately Steve, another member of my run-club was able to bike out to me with a water bottle. This is why I carry my phone while running.  This is also why it is important to run with a group, but as our schedules don’t always mesh, lately I have been doing a lot of solo runs.  Over the next  5 months I will be running 4-5 times a week and following a custom training plan which I derived from several popular marathon training plans including the Hal Higdon plan. Always remember you plan to fail, if you fail to plan! As always I wish you success and happiness!