For I know the plans I have for you,” declares the LORD, “plans to prosper you and not to harm you, plans to give you hope and a future.– Jeremiah 29:11

Wishes and dreams are very nice things to have, but they remain just that unless you set plans in motion to accomplish them. This is why we must have goals in life. The human spirit cannot thrive without hope. It is hope that allows us to make plans and set goals for a better future. It is hope which provides us the impetus to strive to achieve those set goals. However, If we TRULY wish to achieve those goals, we must believe that they are absolutely possible. The moment we say to ourselves “I can’t”, or “it’s impossible”, we have defeated ourselves and we are done! Despair is a dream killer. A positive attitude is fuel for the soul when you are running  on empty.

The Cake is a lie!

The phrase “carrot and stick” is a metaphor for the use of a combination of reward and punishment to induce a desired behavior. There are some people that for whatever reason cannot ‘self-start’. They sit idle in a vegetative state, unable to take that initial step on the path towards their goals. When someone else is dangling a carrot in front of you while threatening a stick for punishment, they are motivating you to do their work. You are accomplishing ‘their’ goals not ‘yours’. For just a moment, think of this concept at your place of work. The ‘boss’ tells you to get to work, you do your job because you don’t want to get reprimanded or fired (the stick). So you work either willingly or under duress, and you earn wages or bonus pay (the carrot). Now ask yourself, who is getting rich off  ‘your labor’? This is why you have to find your own carrot! It’s out there waiting for you. Probably gagged and tied to a stick in the forest of despair.

Once you learn to become a ‘self-starter’, starting is easy. Like the Nike mantra, you “Just Do It”! Habits both good and bad are easy to form, and hard to break.   When I started running at the beginning of 2019, I had a lot of bad habits. It’s very easy to be lazy. I had set a personal goal on New Year’s Eve 2018 that I would start distance running in 2019 with the goal of eventually running a marathon. I was still fat although I had been dieting for over a year at that time. My goal for the first official 5K race I ran was not to be last. I wanted to finish, I knew 1st place was IMPOSSIBLE even with roller-skates and a rocket-powered backpack. It just was not going to happen. So I contented myself with the goal of finishing the race, any place except last. A runner runs, and I wanted to be a runner! On April 28th, 2019 I ran and finished the Beat Beethoven 5K race at Alvernia University in Reading PA, and I was NOT last! Moreover, I received a plethora of compliments from complete strangers that for a first attempt  I ‘did great’. I now knew it was possible to run that distance, that people were rooting for me, and that next time I would do better. I was a Clydesdale ( a heavy-weight runner) and I had found my ‘carrot’!

After the first year of running, I had set goals in place to run twice as many races, more than two dozen with the big race being The Philly Marathon on November 22,2020. This would be my first marathon ever and the coveted Liberty Bell Finisher’s Medal would  be mine! Running a distance of 26.2 miles was no longer an impossible dream, it was a developing reality that was growing from hard work and determination.  Also I had made new friends in the running community, and we had formed a make-shift running club which I dubbed ‘The Pack’.  And then mid-March, COVID-19 AKA the virus that shut down the world cancelled all my slated races in Spring, Summer, and possibly even some in Autumn as well. Now, here’s where being a ‘self-starter’ and having good encouraging friends comes in handy when you’re running down a dream.

Gina, one of the more competitive runners in the group stumbled upon a virtual running series from Run The Edge which was called The Un-Cancelled Project. When the information about the FREE series was disseminated  to the group, I was a little skeptical. Joining a FREE series wasn’t going to cost me anything, and besides, with all the official races cancelled, it was the only game in town. It also convinced me to finally purchase a professional runner’s smart-watch,( a Garmin Forerunner 945) so that I could record my time and distance during these virtual races.

Each week had a theme.

Initially, the series was set for 6 weeks, with 5 races a week. Two ‘beginner’-5K and 10K, one ‘intermediate’- a half-marathon, and two ‘advanced’- a full-marathon, and an ultra-marathon. Due to both the popularity of the free series, and the continuing coronavirus lock-down, the series was expanded to 12 weeks, and two additional races were added to accommodate the beginners (a 8K) and intermediates (a 15K). Also added was the ability to purchase an optional series t-shirt and finishers medal. 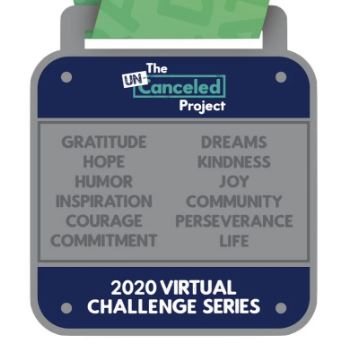 Considering that most races cost $30 and up anyway and did come with t-shirts, I immediately jumped on the opportunity to purchase a series t-shirt and medal so that I had something to show for my hard work. I mean we did get free ‘virtual bibs’ for each race that we could customize with pictures and print out, but t-shirts are nice conversation starters and medals look great hanging on a trophy wall.

Speaking of the virtual bibs- a runners ‘bib’ is the paper number they wear pinned on the front of their shirt while running to identify them during a race.  With official timed races, a record is kept by the race officials of each runner and their time. After the race is done, many runners like to keep their bibs for posterity. So the virtual bibs that you could customize lack a runner number and show the distance instead, but you could add a picture in its place. I did that with a few of the 33 bibs I earned thus far.

GRATITUDE WEEK was a before and after body shot showing how much weight I’d lost my first year as a runner.

COURAGE WEEK was my first virtual half-marathon and friends who ran it with me.

JOY WEEK was a collage showing my personal bests, courses, and the friends I ran with that week.

I must say that these last 11 weeks have been awesome, and Monday June 15th, 2020 marks beginning of the final week of the series LIFE WEEK. Once again I plan to run FIVE races 5K through half-marathon like I did during JOY WEEK, and possibly break at least ONE personal record doing so. And that is the importance of having a goal! Quitters never win, but winners never quit and EVERYONE loves a winner!

As always I wish you success and happiness!

One thought on “WHAT’S YOUR MOTIVATION?”